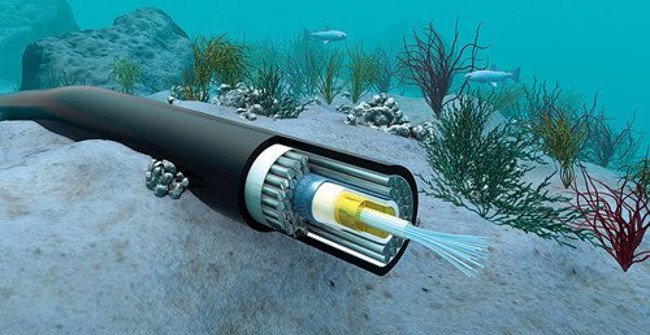 Here’s a way to speed up binge watching

Five million HD movies. That’s how many can now be downloaded in a single second. That translates to 26.2 terabits of data each tick of the clock, which is the record recently set by Infinera, an optical communications equipment manufacturer based in Sunnyvale, California. What may be even more surprising is that it was set while speeding down a 4,104-mile, undersea optical cable stretched from Virginia Beach, VA. to the coastal town of Balboa, Spain.

The cable has a name—Marea. It’s owned by Microsoft, Facebook and Telxius, a Spanish telecommunications company. Marea is one (1) of an estimated three hundred seventy-eight (378) undersea cables crisscrossing the planet’s largest bodies of water. It’s about the width of a garden hose and houses eight (8) pairs of optical fibers. The entire assembly, all 4,104 miles of it, weighs over 10 million pounds. Try dragging that garden hose to your front yard on watering day.

Some other interesting Marea tidbits

The elephant in the room is how a maximum data rate can be exceeded, and by thirty percent (30%), no less. Doesn’t sound doable. It is.

For additional reading about the greatness of fiber optics, check these out:

Just another day in the life of fiber optics

Just when you thought it couldn’t get any better

And see how GDT’s talented and tenured Optical Networking team provided an optical solution, service and support for one (1) of the world’s largest social media companies:

When a redundancy plan needs…redundancy