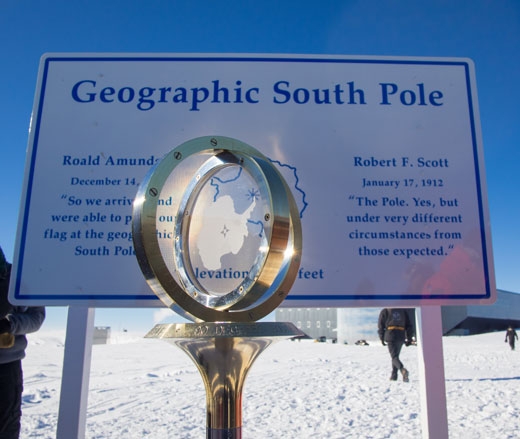 Late for an appointment? Blame it on a Pole

Remember the days when finding your next appointment meant pulling over, fumbling with a map, then trying to line up the creases before shoving it into your glove compartment? Oh, and if you were running late, finding a phone booth and a quarter held sway over locating a misplaced, winning lottery ticket. Yes, it was a pain, but at least it didn’t change due to our planet’s wonky, wobbly axis. Yes, Earth’s axis moves a lot, and guess what? Modern day navigational tools are affected by it. And, yes, that applies to the online maps we’ve all come to rely on.

In the event you’ve had a hunch our planet is wobbling like a figure skater with an inner ear infection, you’ve been right. Our magnetically-charged north pole is moving, and doing so quickly. Here’s the good news—it’s also moving unpredictably. Nothing says “peace of mind” like hearing Planet Earth is doing something unpredictably. But here’s the rub, at least technologically speaking—navigational models have to continually be updated to account for Earth’s inability to control its wayward axis. NATO counts on the updates; the Department of Defense (DoD) relies on them; and, yes, your handheld device, tablet and computer do, as well.

Isn’t it always about that pesky Liquid Iron?

Far below the Earth’s surface, liquid iron does what liquids do—it sloshes around. And this movement is what causes the Earth’s axis to wobble. Fill a basketball with a pint of water and roll it on the floor. That’s us, trying to carry out our day-ot-day tasks on a lopsided basketball. If navigational systems aren’t adjusted to account for the north pole’s migration, which si currently heading from the Arctic Circle towards Siberia, your navigation system of choice is as precise as a stock picker. The degree to which this will affect your ability to find your next appointment is unclear, but it certainly feels unsettling.

The Earth’s axis is currently moving approximately thirty-four (34) miles per year. Yes, that number is relative, but here’s how it relates─The World Magnetic Model, which measures such things, reports that the Earth’s axis moved about nine (9) miles a year when it was last gauged in 2015 (they measure and update it every five (5) years). So, as you may have guessed based on this four-fold increase in speed, the need to adjust magnetometers (ah, yes, the magnetometers) is becoming increasingly more important. The movement so much faster than in year’s past that they’re recommending updates take place now, instead of waiting until the calendar flips to 2020. Our smart phones are built, at least in reference to their navigational components, based on these magnetometers. And mapping applications we’ve come to rely are dependent on the accuracy of the magnetometer.

Oh, and here’s another thing the government shutdown has, well, shut down—the world magnetic model update, which was supposed to take place today. It won’t happen. Those responsible for the update are cursing Google Maps while circling the block trying to find their upcoming job interview.

If you’re heading to an appointment, you may want to take a map with you—the foldable type.

If you have questions about your organization’s current mobility strategy, contact GDT’s Mobility Solutions experts at Mobility_Team@gdt.com. They’re composed of experienced solutions architects and engineers who have implemented mobility solutions for some of the largest organizations in the world. They’d love to hear from you.

You can read more about how to digitally transform your infrastructure, and organization, here:

Workshops uncover insights into the state of IT and Digital Transformation

What is Digital Transformation?

The only thing we have to fear is…definitely not automation

Without application performance monitoring, your IoT goals may be MIA

When implementing a new technology, don’t forget this word

Is Blockchain a lie detector for the digital age?

If you fall victim to it, you won’t end up marking it as “like”

When being disruptive is a good thing