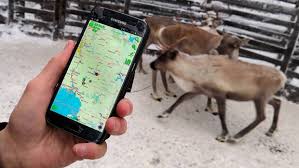 "Rudolph, with your GPS…"

If you really want to get into the Christmas spirit, catch a quick flight to Finland, where the reindeer roam the countryside like squirrels at a city park. It’s estimated that there are as many reindeer as there are people in Finland, and if your livelihood depends on the animal, herding them throughout the country’s northern region is a bear. That is until reindeer will soon be given a label that’s never been used to describe them—smart.

Something else that’s not associated with reindeer—IoT

Finland’s Reindeer Herding Association has been working with Digita, a Helsinki-based communications company, to design a reindeer collar that uses GPS and a Digita’s long-distance wireless network. In Lapland, Finland’s northernmost region, there over fifteen hundred (1,500) reindeer herders who rely almost solely on the animal to provide their living. It doesn’t sound like a lot, but considering the region is home to only a hundred and eighty thousand (180,000) Finns, it’s not an insignificant number. They rely on reindeer for milk, meat and fur, and the reindeer trade dates back hundreds of years. The profession is revered there.

At least five thousand (5,000) reindeer are killed each year, and most of their remains are never found. While the cause of death is primarily due to four-legged predators from nearby Russia—mainly wolverines and lynx—without a body the herders can’t collect a significant stipend from the Finnish government to cover their losses. And when herders lose, on average, roughly ten percent (10%) of their herd each year, that’s a decent chunk of Finnish change.

Herders who decide not to deploy the Internet-connected collars will continue to do what their forbearers have for centuries—roam the vast, snow- and forest-covered countryside on foot to count their herd one (1) Blixen at a time.

Each collar is fitted with a GPS device that’s approximately the size and shape of a deck of cards. They’re hoping to get it down to the size of a quarter—an American quarter―and jettison the collar altogether. Instead, it will be attached to the reindeer’s ear.

If a collared reindeer doesn’t move for four (4) hours, the herder is alerted of their inactivity. If they’ve been felled by a predator, the herder knows exactly where to find their remains. And with the remains comes that government payment. In addition, use of GPS to track and herd reindeer has reduced the need to employ as many workers. Their largest stumbling block had been battery life, but their latest prototype lasts for approximately one (1) year. It’s estimated that the device will cost about a hundred American dollars, but tracking large herds won’t require each reindeer be given a collar. They’re counting on attaching only one (1) to the herd’s female leader, which will allow them to know the whereabouts of the entire herd (apparently, they don’t stray far from the female in charge).

GDT’s tenured, talented solutions architects, engineers and security analysts understand how to design and deploy IoT—including Smart City—solutions for enterprises, service providers, government agencies and cities of all sizes to help them enjoy more productivity, enhanced operations and greater revenue. GDT helps organizations transform their legacy environments into highly productive digital infrastructures and architectures. You can reach them at SolutionsArchitects@GDT.com or at Engineering@GDT.com. They’d love to hear from you.